The Barka team was invited to the celebrations of Polish National Day of Independence hosted by new Ambassador in Dublin, Ms. Anna Sochańska. The event took place at the Royal Irish Academy.

On the 11th November 1918 Poland re-gained their independence after the First World War and, similarly to Irish people, the Polish are very proud of their heritage and history.

For many guests the event was the first occasion to meet the new Ambassador, therefore as a form of introduction, a short video was produced. It was made in the Embassy where the Ambassador talks about herself, her plans during her Irish posting as well as her hobbies and interests.

The highlight of the evening was the performance of Fermata music school’s pupils.

‘There was no key to the room so I couldn’t lock the door and people were... 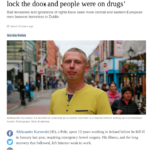 Barka at the Integration and Inclusion Conference
Scroll to top
We use cookies on our website to give you the most relevant experience by remembering your preferences and repeat visits. By clicking “Accept”, you consent to the use of ALL the cookies. However you may visit Cookie Settings to provide a controlled consent.
Cookie settingsACCEPT
Manage consent