Blog - Latest News
You are here: Home1 / Media2 / ‘There was no key to the room so I couldn’t lock the door and people wer... 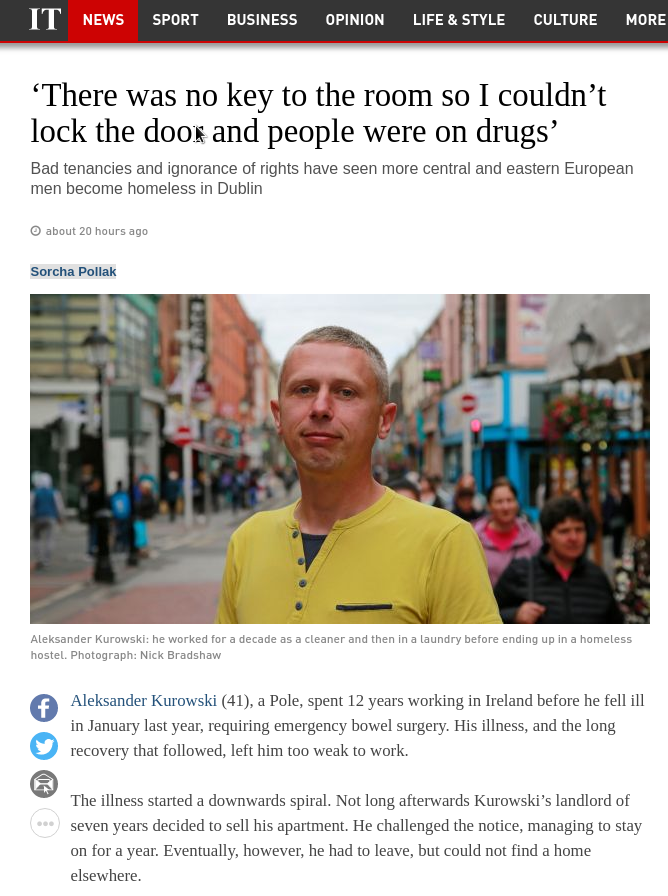 Aleksander Kurowski (41), a Pole, spent 12 years working in Ireland before he fell ill in January last year, requiring emergency bowel surgery. His illness, and the long recovery that followed, left him too weak to work.

The illness started a downwards spiral. Not long afterwards Kurowski’s landlord of seven years decided to sell his apartment. He challenged the notice, managing to stay on for a year. Eventually, however, he had to leave, but could not find a home elsewhere.

In May, Kurowski, who worked for a decade as a cleaner and then in a laundry, ended up in a homeless hostel. “It was strange, sometimes I felt frightened,” he says, in a quiet voice. “There was no key to the room so I couldn’t lock the door and people were on drugs.”

With the help of a translator he explains that he stayed for a few days in the Brú Aimsir hostel on Thomas Street, Dublin, before moving in with a friend. Worried about overstaying his welcome, he left after five weeks and found a bed at the Spire Hostel on Malborough Street.

He is just one of a growing number of mostly male central and eastern Europeans becoming homeless, accelerated by precarious tenancies, ignorance about rights and benefits, or, simply, the consequences of exploitation.

Many come with no idea of how hard it is to get a place to stay in Ireland or the cost of living, says Ciara McGrath of Crosscare. “Many of those we meet are in employment but homeless, but also because a lot of people on an industrial wage in Ireland really struggle. The cost of living here is so high money doesn’t go very far.

“They have more precarious living arrangements and often share with other families. We’re seeing people in tenancies for 7-9 years and then landlords decide to sell or renovate,” McGrath tells The Irish Times.

A European national can stay for three months in Ireland with no income, but, with rare exceptions, cannot qualify for benefits. Despite stories to the contrary, most dole applications from new arrivals are refused. After three months they must show that they have a right to reside in the State.

EEA nationals who find work but become unemployed or unfit for work due to illness or injury can qualify for supplementary welfare benefits for up to six months, although social housing benefits only come if they have worked for a year, and have registered as a job seeker.

EU nationals can only be removed from Ireland if they pose a “genuine, present and sufficient serious threat” to the State, according to the 2015 European Communities (Free Movement of Persons) regulations. This, said the Department of Justice, is “not a deportation order”.

Similar rules are laid down by the EU Citizens’ Rights Directive, though some EU states, including Ireland and the UK, are interpreting the rules in such a way that people found guilty of minor offences can be removed.

People from countries that joined the EU since 2004 – mostly eastern Europeans – can qualify for repatriation if they are destitute and are referred by welfare officials to the Department of Justice’s Reception and Integration Agency (RIA).

Such people are offered a route home as soon as one is “practicable and cost efficient”, said an RIA spokesman. So far this year 55 people from central and eastern European countries have done so.

Some 43 did so to Romania. Four each returned to Slovakia and Hungary; two went back to Lithuania; and one to both Bulgaria and the Czech Republic. Repatriation is not offered twice, so anyone who misses a booked flight will not get a second chance.

A small minority are gaming the system. “Only 3 per cent of people try to use the system to their advantage, but by just offering to send people home you’re sending a message that there’s money for flights. People should know it’s a once-off,” said one source.

Dermot Murphy, director of services at the DePaul homeless charity, says few immigrants want to go back. “It’s not our role to make anybody go home; our principle is to provide people with the best available information so they can make an informed decision.”

Agreeing that a lack of knowledge about housing rights and entitlements is worsening foreign homelessness, Mr Murphy said nearly 5 per cent of newly homeless people who visited the charity in recent months came from Poland. Another 5 per cent came from Romania.

Ewa Sadawska, director of Barka Ireland, which offers its own repatriation aid, has noticed a rise in the number of eastern and central Europeans who have come from England and Scotland sleeping on Dublin’s streets. Many have come because they fear life in a post-Brexit UK, she says.

Since 2011, Barka has helped more than 500 to return home. In the first six months of this year it assisted 37 people – 16 Poles, 10 Lithuanians, six Latvians and four Hungarians. Last year it helped 68.

Most central and eastern Europeans who end up on Dublin’s streets are in their 50s and 60s, says Sadawska.

“Many from the communist generation have the mentality that everything should be provided. Quite a lot of our beneficiaries are 50-plus and have bad English but came to Ireland to try their luck.”

Santaro disputes the claim that Brexit is already pushing more central and eastern Europeans to move from the UK to Ireland. So the numbers Mendicity has found are “tiny”.

Figures from Merchant’s Quay Ireland found that a quarter of the 5,600 people who visited it last year were foreigners, including 305 Romanians, 254 Poles, 214 people from African countries and 114 people from the UK. The majority are men, and most are aged between 30-44.

One man there, who came to Ireland in 2003 and worked for years as a chef before he began drinking heavily and became homeless, he says, because he was jailed for three years for stealing a pair of runners

“All my family were heavy alcoholics. I always thought I was strong but now when I look in the mirror I see my father,” says the man, who claims his employer gave him drink as his addiction grew to ensure he finished his shift.

Following his prison term, he says he spent four months sleeping in parks and on the Liffey boardwalk. Today he has a room in a hostel, and works sporadically as a chef. Asked if he would like to return to Poland, he says no.

“I love this city and I see my future here. I haven’t drunk now in five weeks. For me the important thing is not money, it’s my health. I’m not 20 years old anymore. Merchant’s Quay has helped me stand up. I think the people here really care.”

Reconnection of vulnerable citizen of EU of January – June 2019 Polish Embassy hosted annual celebration of National Day of Independence
Scroll to top
We use cookies on our website to give you the most relevant experience by remembering your preferences and repeat visits. By clicking “Accept”, you consent to the use of ALL the cookies. However you may visit Cookie Settings to provide a controlled consent.
Cookie settingsACCEPT
Manage consent