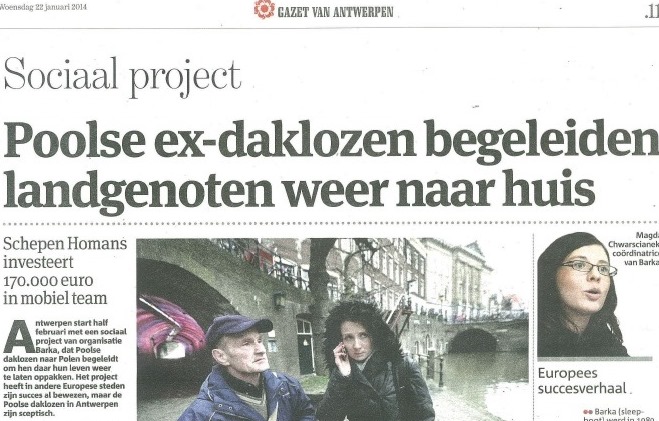 Alderman Homans invests 170.000 euro in a mobile team. Antwerp launches in mid-February a social project of organization Barka which guides Polish homeless to Poland to help them rebuild their life there. The project has already proven to be a success in other European cities, but Polish homeless people in Antwerp are skeptical.

“Going back to Poland? – I don’t think so” says Kazik Jarosław. He is sitting with his friends from a night shelter on a bench at Kievitplein behind the Antwerp central station. One bottle of vermouth has just gone into a rubbish bin, the cap of the second bottle is opened by one of his comrades. “I’ve already been here for 8 years. In Poland I earned 200 euro per month, here this can be up to 1500 euro per month. My only problem is that I’m looking for a girlfriend. Put that in the newspaper.”

The nuisance figures from the police show that Poles and other Eastern Europeans are on the second place, after Belgians, who are nuisance causers in Antwerp. That’s why alderman from Social Affairs Liesbeth Homans  (N-VA) allows 170.000 euro for project Barka– which tackles the nuisance caused by Poles by sending  small teams on the street. They try to convince homeless people to go back to Poland. A family is contacted and if it’s not an option people are accommodated in social projects in Poland such as an ecological farm or a second hand  shop. Also  rehab or  psychiatric care is possible. In some cases Barka helps people in looking for work here.

“The problems which we had with Poles are significantly reduced by this project” says the Utrecht-alderman Victor Everhardt (D66) to Liesbeth Homans who visited Utrecht city hall and Barka Holland on Monday. “In about 2 years 98 people returned to their homeland. The nuisance is reduced by 75 percent. Rotterdam, Amsterdam and Den Haag also cooperate with the organization. The initiative is supported by all parties, from left to right.”

The situation in Utrecht was much more problematic than in Antwerp when the city self-government engaged the Polish organization Barka. Homeless Poles put their tents at the suburbs of Utrecht. “Rejected Somali refugees followed their example and soon these two groups were together in the clinch”, says policy advisor Jan Braat. “Dutch organizations couldn’t solve this problem, Barka succeeded. They don’t employ ordinary social workers but Poles who have been homeless and had problems with alcohol themselves.”

Zbyszek Ściana is one of them. He’s been a “leader” in Utrecht for 4 months. We can accompany during outreach, but because he finally won the trust of the homeless, he would rather not meet anyone. “If I come here with the press they feel cheated. There are already many Poles who returned. The group which is still here is the most difficult and I’m finally beginning to win their trust.”

At the beginning Ściana just hung around with his compatriots. He helped them with bringing Polish newspapers or visited them when they landed in a hospital. “I told them everything about my life. I don’t try to convince them to go back. They have to make a choice themselves. But my story makes them think. And, because I’m Polish, I win their trust faster.”

In Poland Zbyszek Ściana lives in a community that runs an ecological farm. They sell the vegetables on the market. “I met my wife there and we have now two children. This is good life,  which people here also want that. They often came here with big dreams but were often cheated and ended up on the street.”

In the past, a lot of Poles were deported from The Netherlands, but they kept coming back.

“We offer them a perspective”, says Magda Chwarścianek from Barka. “We want to let them re-integrate in the society and that’s easier in the mother tongue.”

Liesbeth Homans is convinced that the project in Antwerp will succeed. “The police in Antwerp estimate the group of Eastern European nuisance causers at about 300. What I like about Barka is that people aren’t left to their fate.”

In half February the team of two people starts in Antwerp. “For the first year there is 170.000 euro reserved. If it goes well stands for the following years the same amount in the budget.” Antwerp Poles respond present skeptically. “ I go back once a year” says Kazik’s friend from Kievitplein. “That’s enough”. This reaction doesn’t surprise Zbyszek Ściana. “This also said Poles in Utrecht. But if they think better, they realize that they will have a better life in Poland.” 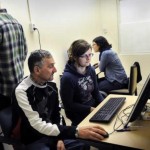 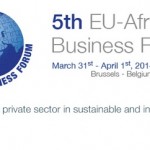 Barbara Sadowska participated in the EU- Africa Business Forum
Scroll to top
We use cookies on our website to give you the most relevant experience by remembering your preferences and repeat visits. By clicking “Accept”, you consent to the use of ALL the cookies. However you may visit Cookie Settings to provide a controlled consent.
Cookie settingsACCEPT
Manage consent