„I know, how it is to live on the street” – Ex-homeless guides  Polish drifters back home.

After great success in England, Ireland and the Netherlands also Antwerp invited Polish organisation Barka. They guide homeless people back to their  home country. The team responsible for the project here has started this week.

According to the police estimations, there are approximately 300 trouble makers in Antwerp,  of Polish or  other Eastern-European origin. To deal with this problem, to relieve day  and night shelters and to help homeless people, the chairman of Social Affairs department, Liesbeth Homans (N-VA) allocated 170.000 euro for Polish organization Barka to start the project in Antwerp. 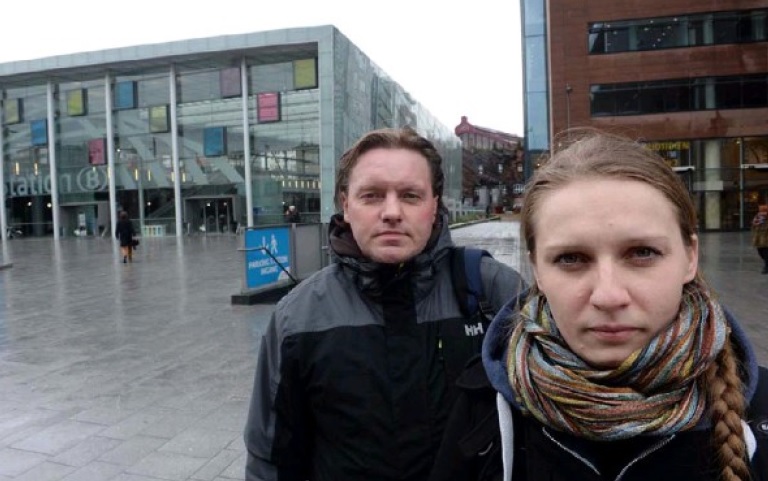 Their mission: motivating homeless people to put their lives back together, preferably in their home country. It was such a success in the Netherlands,  that  one city after another,  allocated money for Barka. In Utrecht, in 2 years time, there were 98 people who have chosen to go back. The nuisance in public space in the city has decreased  about 75%. The secret of their success?  Barka sends 2 Polish speaking people to the street to talk to the homeless, a social worker  and an experienced ex-homeless. In Antwerp Renata Bogacka (31) and Mariusz Żeleźnikow (40) motivate Polish homeless to a new start in their lives.

Do you know the situation in Antwerp well?

RB: Years ago I worked in Antwerp as an au-pair, this is how I got to know the city.  Since then I used to come back here  every now and then and now I live in the neighbourhood of Antwerp.  This week we visited for the first time the shelters, where  Polish people come –  winter night shelter Victor, Kamiano, De Vaart and other places. I didn’t know this side of the city yet.

MŻ: I got to know Antwerp only now and I find it impressive city with majestic station and all those huge buildings. Two years ago I lived on the street in Dublin myself. So I know very well the situation homeless people are in. I didn’t dare to go back to Poland because I was ashamed, but living like that, I was also aware that I could end up  in the prison or on the cemetary.

How did you fall into that situation?

MŻ: I’ve been drinking all my life but for a long time I was able to keep it under control. I was working in Dublin for two years and I was renting an apartment. First I worked in a hotel, later as a gardener in the company growing decorative plants for bouquets. I was earning good money so I was able to buy more drinks. After some time everything collapsed. I lost my job, couldn’t pay my flat anymore and ended up at my friends. I still tried to do some temporary jobs but at certain moment even that was too heavy for me. I started to live on the street. I was starting the day with the bottle of vodka and kept drinking till I could. I was sleeping on the piece of cardboard in some porch in the shopping street.

Did you meet somebody from Barka, there in Dublin?

MŻ: Indeed. Barka had started the project in Dublin and Andrzej was a „leader” back then – the job I’m doing now.  I didn’t trust Barka, I thought that it was some kind of a sect but Andrzej seemed to be a nice guy. I made friends with him and we talked a lot. At the moments I was sober I started to realize that I didn’t want to carry on that way, didn’t want to live the life without any perspective. I didn’t want to go back to my family, because of shame, but thanks to Barka I went to one of their community house projects, on the farm in Chudobczyce. I sobered up there and later I started working as a construction worker.

The community recommends the person who will go abroad to work as a leader.

MŻ: That’s correct and that’s a sign of trust. First I worked 1,5 month in Rotterdam, now I am probably going to work for  5 months in Antwerp. Later I’ll be replaced by one of my collegues.

Most of the Polish people, who are homeless in Antwerp, don’t really want to go back. They don’t have anything there anymore and the salaries are low.

MŻ: I know that a lot of people say that. But I also know from my own experience that you want to show to the world that you’re strong. It’s very difficult to admit that you failed.

RB: The fact that we speak Polish, makes Polish people trust us easier. Barka doesn’t leave people to their own destiny, with all the projects in Poland, gives some alternative for the heavy life here. What’s more – addiction rehabilitation treatment and reintegration are definitely easier in your mother tongue.

MŻ: For a long time I was hesitating because I didn’t really know if I wanted to go to Poland. I had told Andrzej that I would go only if he agreed to make this trip together with me. And he did it, he accompanied me for 3 days on the bus, while I’ve been constantly drinking. I was scared and I can’t say that from the first moment on the farm I felt good. But now I feel like at home there. I have been sober for 2 years now and I have contact with my family again. My story doesn’t give any  guarantee that it will be the same for anybody else, because there are also people, who fall again and return to the life they led before.

There is some critics about your approach, that you’re going to send people back.

RB: We don’t send anybody back. That’s always an individual decision. We give opportunity that people can take or not.

The idea has double meaning: there is help for homeless, but  at the same time Antwerp invests in this project  because homeless people are mostly troublemakers.

RB: If the city, thanks to our work  becomes at the same time safer as the side effect of our work, that’s good. But that’s not our main goal. We want to help people,  as much as possible.

MŻ: We don’t  distribute blankets or soup, we don’t want homeless people becoming well organised homeless. In Poland we say: give a person a fishing rod, rather than a fish.  We believe and hope that people  don’t have to live on the street. That’s our only goal.

How are the first reactions?

MŻ: We feel welcome, we’ve been already talking to few people. These are first conversations to get to know people. Next months we will be coming to different places every day to get to know homeless people coming there better.

When you can talk about success of your project ?

RB: We don’t count in numbers. This model works, the projects in Dublin, London, Rotterdam, Utrecht and other cities are a proof of that. If we manage to help even a few people, we will be satisfied.

Barka was founded in 1989 in Poland  to help homeless and addicted people. Since 2007 Barka is also active in London. More than 2000 homeless people from the Eastern bloc countries returned home with Barka from London. In the Netherlands already 619 people decided to go back.  Barka starts also a project in Vancouver, Canada soon.

Social economy is not a sector

Larisa Melinceanu – study visit in Barka Network in Poland report
Scroll to top
We use cookies on our website to give you the most relevant experience by remembering your preferences and repeat visits. By clicking “Accept”, you consent to the use of ALL the cookies. However you may visit Cookie Settings to provide a controlled consent.
Cookie settingsACCEPT
Manage consent